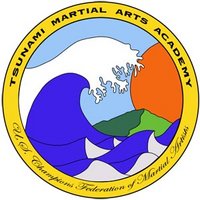 The name Tsunami Martial Arts Academy was chosen because of its representation and inner meaning. Being that water is the most adaptable and powerful of the four elements of the universe...The Tsunami is a great sea wave produced by submarine earth movement or volcanic eruption...Thus explained as the great wave of Martial Arts Energy that is called upon from the Human Spirit when the Warrior Code of Bushido or Honor is challenged.

The shape of the seal is circular, representing the global influences Martial Arts have in times of old, and in the present through Discipline, Humility, and Respect...Budo (Martial Way).

Yellow - Representative of the people and fighting arts that originally developed in and around the Yellow Sea, which later migrated to Okinawa.

Black - Representative of the African Americans who established the U.S. Champions Federation of Martial Artist, and who taught the Okinawan System, Matsu-byashi Shorin-Ryu (Pine Forest Style of the Shaolin System) to inner city children and adults.

Red, White, and Blue - Representative of the colors of the flag of the United States of America, and the American Martial Arts System developed by Grand Master Garcia Davis, and taught as the premier Self-Defense System at the Tsunami Martial Arts Academy.

Green - Representative of the island of Okinawa located south of Japan in the North Pacific Ocean.

With all colors and images of the seal brought together as one image, one sees the balance of the four elements of the Universe...Earth, Wind, Fire, and Water. This is the balance of how a Martial Artist should conduct themselves;

Earth - Stability and good character Wind - Always moving, and moving others towards perfection in all things attempted. Fire - Serving one's community and society with the burning fervor of the sun. Water - Fluid and powerful, being able to change and effect change whenever necessary.